A group of friends who have known each other for forty years wanted to celebrate their long friendship with a trip to somewhere very special that none of them had ever visited. They decided to travel to Iceland—the land of spectacular volcanic geology and never-ending summer nights—to go on new adventures together. We’ll share a video of their journey through Iceland in an upcoming post, but here’s a sneak preview of one of their unforgettable activities: whale watching.

On a whim, the group decided to take a whale-watching tour from Húskavík, on the country’s northern coast. The area is considered one of the best in Iceland for whale watching (98 percent of trips include a whale sighting).

“Whale watching was not something we had thought much about when we were planning the trip,” explains Andy Kaddar, who had traveled with his wife and another couple from Israel to meet their friends who flew from the US. “Some of us had already been whale watching before in other places, and we weren’t sure that this trip would be much different. But we found a company with a fast boat that offered a tour that was less than two hours, so we decided to go for it.”

The adventure trip video editor, Adi Gutman, used the footage in chronological order so viewers feel would like they’re along for the ride.

“I wanted to recreate the experience of actually being on the whale-watching trip, from boarding the boat to visiting the puffins to watching the whales to heading home,” she explains.

First, the three couples suited up in waterproof outfits and goggles (the Zodiac-style boats can get a bit wet) and embarked on an incredible journey on Skjálfandi Bay. They got up close to Puffin Island, a 100-by-200-meter (330-by-660-foot) island that is the summer nesting spot of 300,000 puffins. These clowns of the sea, as they are called, are an important cultural symbol for the Icelandic people.

“Puffins are special to Iceland. Everywhere you go, you see stuffed animals and souvenirs of puffins, but you can’t see real live puffins on the main island,” explains Andy. “It was amazing to get to visit their home and see so many of them.” 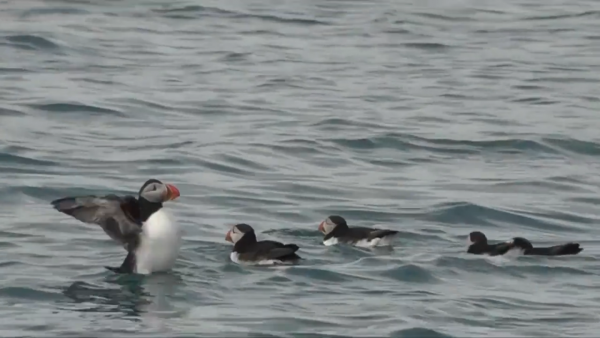 The tour brought them farther out to sea, where they were greeted by friendly, theatrical humpback whales. These “gentle giants” reach thirteen to seventeen meters (forty-three to fifty-six feet), and they love to greet and show off for humans.

“The humpback whales like to smack the water with their tails. It’s how they signal their power,” Andy explains. “I had never seen anything like that; it was so powerful.”

Adi was especially enchanted by the footage of the whale tails slapping the water. “I used slow motion effect while editing the whale scenery, and it was a great fun seeing its movement with the big splash of water,” she says.

The boat also came across a rare sei whale and a pod of white-beaked dolphins.

After spending some time with the whales, the group celebrated by pouring shots of Brennivín (a traditional unsweetened schnapps) and toasting the life of the whales.

“I really enjoyed putting this video together,” Adi declares. “I think people watching it will feel like they’re right there on the boat, meeting all these incredible animals and enjoying the company of friends.”

“We saw many amazing things in Iceland, but seeing the whales and the puffins was especially memorable,” says Andy. “In the forty years that we’ve known each other, this was one of the most fun things we have ever done together.”

Click on the video at the top of the page to ride along on this special whale-watching adventure.


A Bar and Bat Mitzvah Tribute Video: Celebrating the Journey So Far